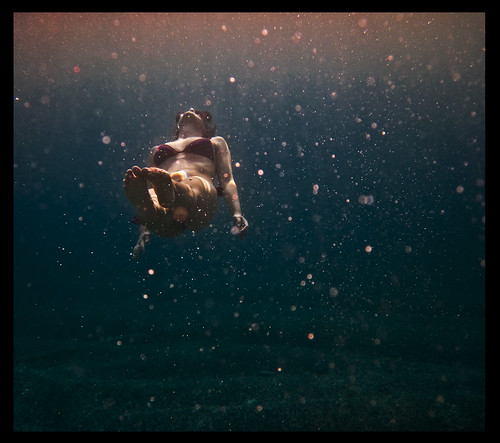 A huge part of how I define myself is survivor. I’ve survived a lot in my life, but the thing most present in my mind when I say “survivor” is breast cancer. Up until last Wednesday, December 3, I was calling myself a twelve-year survivor. Now I don’t know. Now I’m just pending. Now I’m suspended like the tiny pieces of my flesh gathered for the biopsy.

Last Wednesday was my yearly diagnostic mammogram appointment. I scheduled it for as early as possible, 8:45, and showed up even earlier, before 8:30. I was wearing my exercise clothes, thinking if I got in right away I’d be able to make my 9:30 Zumba class.

Even though it’s been twelve years, I’m always anxious before having a mammogram. I don’t know a woman who isn’t. The procedure itself is embarrassing and torturous, and they are looking for cancer. On the day you need it most, you’re not allowed to wear deodorant.

A diagnostic mammogram is different from a standard one, in that the radiologist is scheduled to read your films during your actual appointment—while you wait in the mammography room still wearing your hospital gown—just in case they want more pictures. It can be a long wait.

After my technician, Nancy, left the room the first time I took a picture of the torture machine and posted it on Facebook with the caption, “Ladies! Guess where I am this morning.” I also took a picture of the machine’s inspection certificate dated March 11—my mother’s birthday. Somehow that date always reassures me.

When Nancy came back in, she didn’t make eye-contact. “The doctor wants more pictures. Of your right breast.” I felt myself start to sweat. This time, when she left, I sat down to wait. I breathed slowly. I prayed. Suddenly the room felt chilly and I was shivering.

When Nancy came back, she announced that the radiologist wanted an ultrasound. Still wearing my gown, I gathered my clothes and purse and coat and followed her down a long hallway and into an ultrasound room.

Dr. Choate, the radiologist, was there in a flash, along with another technician, Kelly, and the breast imaging department nurse, Peggy. Dr. Choate explained what she had seen that caused concern. Already films from my visit the previous year were on the screen for comparison.

The ultrasound seemed to take a long time, and Dr. Choate’s final conclusion was that she wanted to do a biopsy of a particular area she showed me on the screen—dark gray with undefined edges. Different from the concise black ovals that were fluid-filled benign cysts. Different from the light-gray healthy breast tissue.

Peggy told me to come with her. Again, I gathered my stuff and followed. This time I was told to wait in a room called the “gowned waiting room” where there are changing rooms, and lockers, and deodorant removal pads in case you’d forgotten, and piles of magazines. There were also chairs filled with women wearing stricken and terrified looks on their faces. Crying women. This was not a happy place. This was the room where those of us not having a routine mammogram waited for the next procedure or piece of news. Praying for the good—fearing the bad.

I jammed my clothes and coat into locker number two, and put the stretchy cord around my wrist. I waited.

Peggy came and got me and took me to her office. She explained the whole procedure to me. How, using the ultrasound as a guide, they would use a hollow needle to collect the cells. I’d be well-numbed, but would be sore for several days afterwards and unable to lift things, do housework, or exercise. Once she made sure I’d not been taking anything that acted as a blood-thinner, I was approved to go ahead with the biopsy immediately.

They were trying to get hold of my doctor, because without an order I wouldn’t be able to have the biopsy that day. There was a time crunch, and another patient had cancelled so there was a 9:15 spot if we got the order. If not, I would have to wait at least a week for the next available appointment. My doctor is never in her office on Wednesdays, but she responded immediately to her page and put in the order. I was taken back to the gowned waiting room while they set up.

By the time I was back in the ultrasound room, I was freezing. Peggy got me a warm blanket and they started the biopsy. The most pain I felt was from the initial shots, and then there was just a sensation of tugging and pressure, accompanied by a loud vacuuming noise from the biopsy machine. Dr. Choate placed a marking clip at the biopsy site and flushed it with saline solution. By the time she finished, I was seriously sweating.

“Do you want to see them?” Dr. Choate asked.

She held up a clear glass container with a black top. The container was about the size of a prescription bottle. “Can you see?”

Mostly I saw water, or whatever the clear solution was. But when I looked hard I saw one tiny, ragged speck of white tinged red with blood.

Kelly took one more mammogram film to record the image with the marking clip in place then I got dressed and went home.

All too aware of the irony of my most recent blog post, I put another status report on Facebook. “Ummm…note to the UNIVERSE: Just because I’ve FINALLY found extreme gratitude for something really awful doesn’t mean I’m asking for MORE!” Only five people caught on, that I know of—including my son and my best friend Tanya.

I was told I would have the biopsy report by Friday afternoon. I checked in with my doctor’s office twice on Friday and was told the results were still pending. It’s now Sunday afternoon and I’m still waiting.

Last night about 10:30 I checked my phone one last time before bed and saw a new email from NorthshoreConnect. “New test information is now available. To review, simply login.” I told my husband I needed to go check and he followed me downstairs to my computer. “I don’t want you to be alone when you read this,” he said, and I appreciated his company.

There were three reports from the morning of December 3: One of the initial mammogram, one of the ultrasound, and one from the hollow-needle biopsy. All three referred to the “suspicious mass” in my right breast. I scrolled through the final report for results, and there were none. Histology pending, it read.

So, I wait. Tomorrow I should know something. I’ve tried to stay busy and I’m trying to be hopeful, but I’m feeling seriously unhinged. After tomorrow (I HOPE!) I will know what my immediate future looks like. Will it go on as planned, or be seriously disrupted? I don’t worry about dying, and I do. Since I go for my diagnostic mammogram every year, chances are slim that I have Stage 4 cancer. But am I still a twelve-year survivor? I don’t know. Histology results are pending and I feel as suspended as that tiny piece of bloody flesh.

I am thrilled to announce that I am still a twelve-year survivor! Both times I called my doctor’s office today the results were not in. I finally got my results at 3:20 PM.

“You’re good!” Joan, from my doctor’s office delivered the news, sounding as relieved and happy as I feel.

Will my life go on as planned? Maybe—only with much more reverence. I’ve done a lot of thinking and praying (and begging and bargaining) and talking over the past five and a half days. I realize how much I am loved and how much I love and how valuable my health is. My take-away lesson from this whole life adventure is not to take any of it for granted.

« What Shrinks Know (#19): The Gift of Extreme Gratitude» Moving Forward