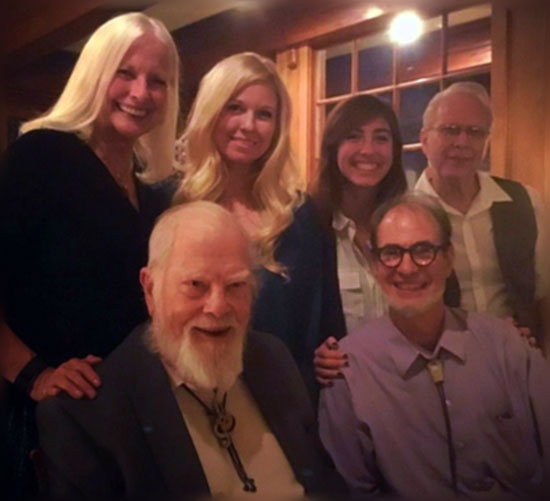 “If you cannot get rid of the family skeleton,

you may as well make it dance.”

Really, George? The skeleton? Just one? Most families I know have many more than one skeleton in the closet. Tis the season when shrinks’ couches are filled with people stressing over their families. In my family, the skeletons could form their own dance troupe.

I’ve written about the skeletons on my mom’s side of the family (Am I Blue?) and within my own immediate family of origin (Word Salad). My family is so dysfunctional that I could write about it for years. But, today, I am writing about finding the joy in family.

Last month, there was a reunion in Granada Hills, California at the home of my Uncle Dick, my last remaining uncle on my daddy’s side. Daddy was the oldest of three boys, and he died young, at fifty-eight. Uncle Earl, the youngest, died in his seventies. Uncle Dick, the middle brother, is ninety-five.

Uncle Dick and Aunt Betty, who died in 2006, had two sons, Brad and Larry. I never knew my cousins. My baby brother Joe and I grew up in the South and Texas. They grew up in California. As kids, Joe and I had little contact with any extended family. Everyone lived in different states. Brief visits occurred only as we moved locations or took road-trip vacations in our Studebaker station wagon. We never made it to California.

This past spring I saw Brad when he was visiting Chicago. We met for a couple of hours at a Starbucks. It was lovely, but far too brief. It was the first time we had seen each other since we were kids. Before our reunion, I had last seen Uncle Dick in Jackson, Mississippi in 1995, when a small group of family gathered for a surprise fiftieth anniversary party for Uncle Earl and Aunt June. Larry and I cannot remember when we last saw each other, but it was as children.

Since July 2006, I’ve connected with my Uncle Dick semi-frequently through emails, phone calls and Skype. He’s shared stories of his life and about growing up in Chicago—stories about my daddy. His voice reminds me of Daddy’s.

Through the years we’ve grown closer and I’ve longed to visit. Longing became urgency in September, and I emailed Cousin Larry, suggesting a visit. Larry lives only minutes from Uncle Dick, and I knew I’d need his help to pull it off. Larry’s response was immediate and enthusiastic. We started considering dates and on October 15th I booked my flight.

Larry and Uncle Dick picked me up at LAX on Thursday morning, November 19. As I walked outside, Larry rushed up, saying, “I saw you right away!” He led me to the car where Uncle Dick sat beaming. I leaned into the window and we hugged and kissed. Looked into each other’s eyes.

We drove to Uncle Dick’s house, where Brad and Larry grew up. It’s a lovely, comfortable, ranch-style, filled with paintings, figurines, matching green-striped recliners—mementos of his life and long marriage to Aunt Betty. One room is totally devoted to stereo equipment and an extensive collection of LPs and CDs, another to his lapidary workshop.

Uncle Dick is a serious rock-hound! Shelves groan with rock and mineral samples from all over the world, and he has machinery to polish stones and create bolo ties and jewelry. Years ago, Uncle Dick sent me a beautiful pendant he made of Montana moss agate set in sterling silver. It is one of my most prized possessions.

Cousin Brad and his daughter Esther arrived soon after I did—having flown in for the weekend from San Rafael. As we all sat talking in the living room, I gazed at my family.

Uncle Dick looks great! He has always been a handsome man, with brown eyes and a beautiful smile. When he was young, his hair was dark brown and straight, and he was clean-shaven. For decades now, his hair has been silver. He sports a white beard and mustache, and, with his penchant for bolo ties, he resembles a dapper Colonel Sanders.

Brad, the oldest of my two cousins, is tall and lanky with dark hair, brown eyes, and a beard. He resembles my brother Joe. Brad vibrates with energy, ideas, and anecdotes. Spills stories into the room—tales of when he and Robin Williams worked as busboys. Brad exudes enthusiasm.

Larry is blond and fair, with light eyes and a beautiful smile that lights up his face. He is the more introverted of the brothers—quiet and watchful in the midst of a crowd, but full of his own fascinating life-stories when one-on-one. Of the two, I am most like Larry, in both looks and nature.

Both men are bright, funny, talented, and kind-hearted. They love their dad and their kids, and they are great fathers.

Esther is twenty-four. She is lovely, bright, and funny, with her father’s dark hair and eyes. Initially reserved, she soon jumped right into the conversation. Esther’s older brother, Morgan, was unable to join us, as he is in Colorado training to qualify for the U.S. Olympic wrestling team.

That first day we had lunch at Denny’s, seated together in a large booth. Filling up the space with talk—eager, not awkward. And laughter. It felt easy and fun.

Later, I spent a couple hours at my hotel, swimming and resting, before being picked up for dinner by Larry and his wife. Debra jumped from the car to give me a warm hug. I discovered her to be creative, funny, intelligent, and generous of heart and spirit. Debra is also an avid Packers fan, so we had something to spar over!

Dinner was at a steak house—again, all crammed into a booth. There was talk, sharing stories, Uncle Dick’s jokes I heard as a child, and much laughter. Brad and Esther even broke out in song! I admired their loving, easy relationship.

Friday morning, I had breakfast with Debra and Larry. Cousin time. When we got to Uncle Dick’s, he was in his recliner, covered with a blanket. Looking tired. But his energy increased throughout the day and over the weekend.

My husband Barry arrived that afternoon, and was warmly welcomed into the clan. That night’s dinner was at a lovely restaurant called Odyssey, set high on a hill above the valley. Larry’s daughter Meagan joined us, and we dined at a long table as lights twinkled in the city below. Meagan, twenty-nine, is a smart, funny young woman, with long blonde hair and Larry’s beautiful smile.

Throughout our entire weekend we shared spontaneous stories, anecdotes about ancestors, family history and family secrets, jokes, laughter, and song. Guitars appeared. Saturday afternoon we snacked on beautiful food, listened to music performed by my family, and sang along.

Both my cousins are musicians. Larry is a professional musician, playing guitar in rock and roll bands. In fact, all the men on Daddy’s side of the family have musical talent. Uncle Dick plays the guitar and sings and Uncle Earl drummed. My daddy played the trumpet and loved to sing, Joe played the drums, and my older half-brother Mike, who died in 2006, played just about everything.

I have video clips of Larry, Brad, and Uncle Dick sitting together on the sofa—Uncle Dick in the middle. Brad and Larry play guitars and the three of them sing. Waltzing With Bears, Worried Man Blues, Folsom Prison Blues. Uncle Dick is full of life! Strong of voice!

I also have a short clip of Esther singing The Girl from Ipanema, then laughing, sipping her wine.

For hours, we pored over Uncle Dick’s photo albums and the pictures I’d brought, while he filled in family history. Sadly, there were no pictures of all of us cousins together. Not a one. Brad and Larry both remember a time visiting my family in Mesquite, Texas when I was in high school. I have no memory of that visit, but I trust theirs.

Saturday night, we stayed at home, drank wine, and ate Kentucky Fried Chicken while sitting around the kitchen table. Comfortable and easy.

While I will forever grieve the lost years, there is much to be said about meeting in late adulthood. There is no need for posturing, pretense, drama, or competition. There were honest revelations. Painful disclosures. Connections made far transcending those that might have been made as children playing ball and board games. The weekend was perfect beyond my wildest hopes. Everyone brought their best selves to the party. There was love and there was grace. As Larry wrote me afterwards, “It was all joy!”

Usually it’s easy for me to walk away or say “goodbye” without falling apart. When a patient walks out my door for the last time, I cry in private. And then—I tuck it away and move forward. Just like I was taught as an Army Brat. Just like I’ve learned to survive loss in my profession. I mourn everyone who has ever sat on my couch and left—some more than others. How ironic that my chosen profession demands I get close to people who will ultimately leave me.

That Sunday, leaving my family, I cried as I hugged each one and said “goodbye.” I cried as we drove away, waving until they were out of sight—like a child in the back of a Studebaker station wagon. I cried for much of the way to the airport.

I went into our November reunion without expectations and left richer than I could ever have dreamed. I have family. My dear uncle. Two cousins who are beautiful, loving men. Two lovely young women—my cousins once removed. Sweet Debra. Now, there are promises of more reunions to come—next April, for Uncle Dick’s 96th birthday—where we hope to bring even more family together.

Sometimes you don’t know what has been missing from your life until you find it. Along with the profound joy I feel from finding family, I’m also left with a nameless sorrow—filled with a missing as acute as any I’ve ever felt.

But there was love, laughter, and song that long November weekend. Legions of skeletons were freed from closets and allowed to dance!